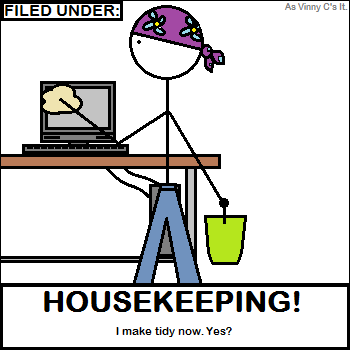 Twenty days in and this is only my first post for the new year. Good thing I didn't go and make a resolution about blogging more consistently for 2015... heh... heh... (*scratches "blog more consistently" off New Year's resolution list*). In my defense, it's mostly because we don't have internet set up at the new place yet. That and we're now so far away from civilization even our data coverage is close to non-existent most of the day.

So, yes, as you may have picked up, we have moved and have now officially joined the ranks of "homeowners". Now we just have to clear off that mortgage over the next thirty years or so and it's all ours. Just in time for the kids to kick us out into a retirement home and start fighting over it.

As cool as it is to finally become a homeowner, in the end you still have to go through the whole process of moving and that's always fun. Isn't it? (NOTE: By "fun" I actually mean a huge barrel of suck... You probably already knew that.) You have your packing, heavy lifting, unpacking, exhaustion, aches, pains and stuff that gets broken. Yeah... fuuuuunn! (See earlier note.) We did that over the Christmas weekend which means we were too busy doing all that stuff I mentioned earlier and too broke to really celebrate Christmas (alcohol was consumed, though).

When the dust settled and we finally got some sleep (about a week after we moved in), we then had time to sit and take it all in.

The novelty wears off soon enough though. Right around the time when you realize the last ounce of dependency you had on others is gone. Before, if you lived with your parents or, as in our case, you were a renter, you knew there would be certain things beyond your control. Leaky roof? call the landlord! Faulty plumbing? Get that landlord on the phone! Pest infestation? Better get the landlord to call in an exterminator.

Speaking of which, that leaking (READ AS: "gushing") shower faucet issue I mentioned the last time, yeah, we're trying to sort that out. Surprisingly, the agency responsible for the houses is actually saying they'll arrange to have the contractors come in and sort it out. Now we just have to see how long that takes to happen.

In other news: Kawaii's adjusting well after the move. She did get really sick the first night and we were more than a little worried but she eventually pulled through and, a few days later, she was back to her old self (cue the obligatory cute puppy pic).
Unlike at the old place, where she spent all her time indoors due to our former neighbors', not-so-friendly (or clean) dogs that already occupied the yard, here she gets to go out every day (on a leash until we put a fence up). I've even started taking her for walks around the block (I feel so suburban now you would not believe), which she loves.

She's also taken an interest in the of local wildlife (READ AS: "bugs") which our new area has in copious amounts. And, since they often find their way inside the house, she has plenty of opportunities to examine them... after she chases them down, swats them to death with her paws and - of they're big enough - tears to shreds with her teeth.
She's a curious girl.

Speaking of wildlife, we also have birds in the area. Lots of birds. Birds that are mostly quiet in the day but then there are these others that let out loud, eerie "squawks" throughout the night. We don't go outside much at night. As luck would have it, among the various species we also have my arch nemeses, Grackles.
At some point I really started to wonder if someone was just f*cking with me.

Anyway, their mating season is still a few months away so they don't have a reason to start attacking people yet. So there's that.

On the plus side, at the outer end the street leading into the community there are horses. 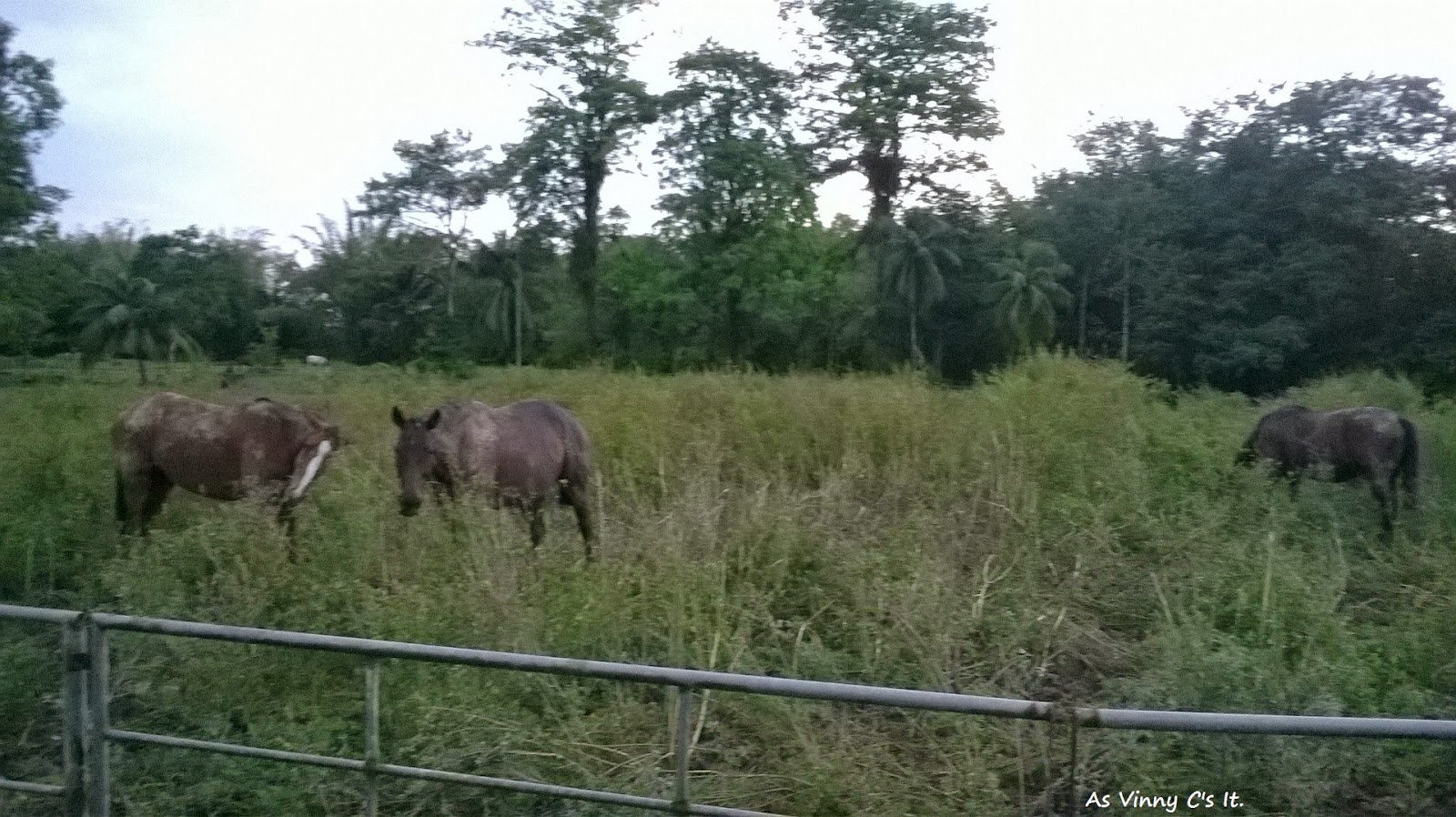 One of the biggest adjustments, though, is that this an entirely new community. We were among the first two hundred plus people to get keys and everyone's new here and only moved in weeks apart from each other. That means none of us got treated to one of those scenes you see in the movies where the local community group forms a welcoming committee to bring you baked goods to mask their real objective of scoping out your stuff.

I want a blueberry muffin, dammit!

Instead, we all just get to watch silently as we observe another moving truck roll up the street and hope the whoever-it-is isn't planning on starting a meth lab in his/her kitchen or blasting Jamaican Dancehall music every night until 3AM (it's popular here). 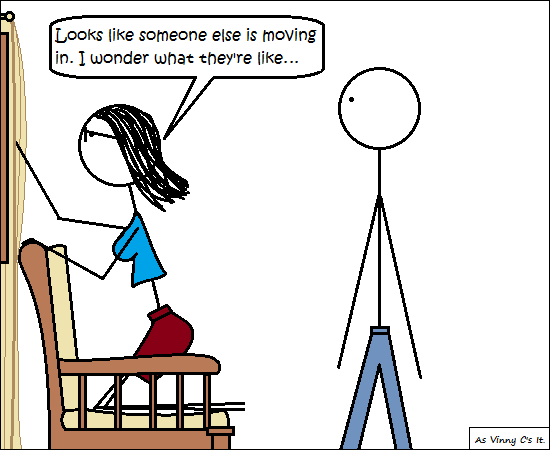 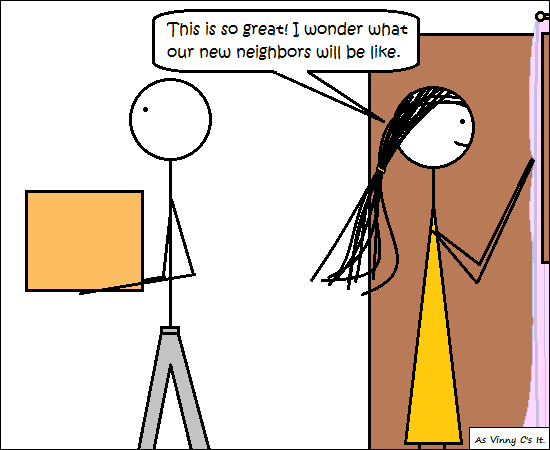 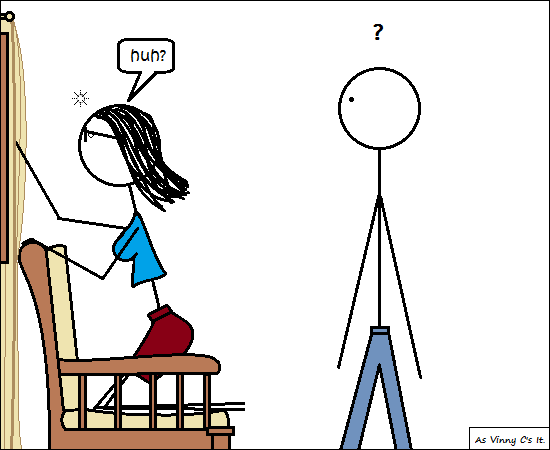 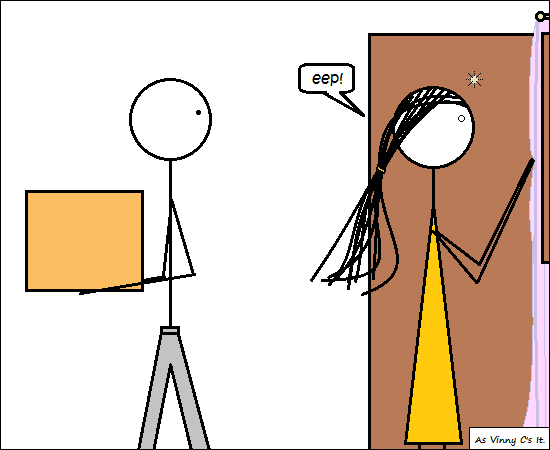 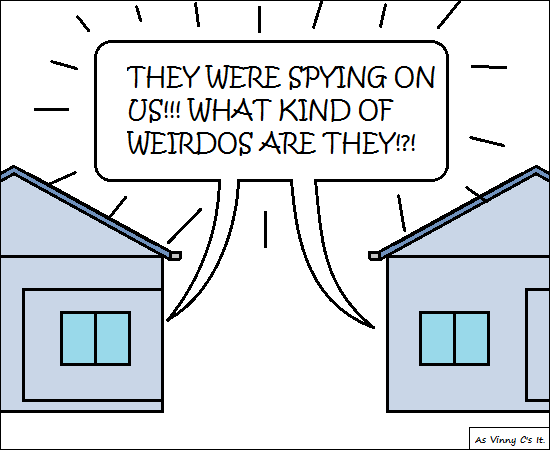 The adventure begins.
Posted by Vinny C at 1:17:00 PM 28 of my homies said
Email ThisBlogThis!Share to TwitterShare to FacebookShare to Pinterest
Filed Under: a moving experience, animals, for the birds, homeowners, Kawaii, my crappy cell phone pics, paint skillz, pests, these are the people in your neighborhood, toons
Newer Posts Older Posts Home
Subscribe to: Posts (Atom)