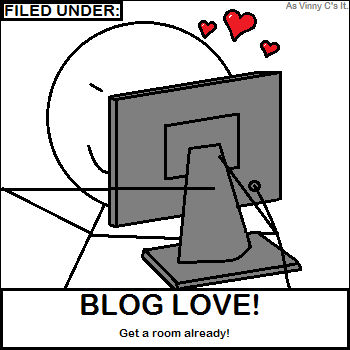 Coming down to the end of last year, I mentioned in a post that I was considering bringing the one and only blog award I ever made out of retirement. By this, I'm talking about the Tanned Hide award, of course.

A few people seemed to think it was a good idea and since I'm a man of the people (and because I was probably going to do it anyway), I'll give the people what they want... and apparently, what they want has something to do with spankings.

I'm not one to judge.

Anyway, in its previous state, the Tanned Hide was a lazy man's award in that you had to do nothing once you received it. All you had to do was hang it on your wall and think of what explanation to give to your friends when they ask about it. This time, however, there are going to be one or two rules to make things more interesting. Plus, I made some slight changes to it:
Now for those rules. Don't worry! You won't have to share any embarrassing secrets, send me money or spam the award to 10,000 of your friends.

Well... If you did feel inclined to send a few bucks my way, who am I to say no?

Kidding! All you have to do is say who you think deserves to be put over a knee and given some well deserved positive punishment. I know what you're thinking and, no, I do not mean you'd want to see them spanked in a kinky way. If you receive the Tanned Hide Award you must tell a story about someone (there is no need to name names, if you don't want to) who has done something to piss you off to such an extent that that someone is obviously beyond having their toys taken away and being made to sit in a corner until they've had time to think about what they've done.

This applies to any person, or even a group of persons, you may or may not know personally. That person can be a celebrity, a coworker, some idiot you randomly come across who managed to take up two parking spaces with a Mini Cooper, a foreign dictator, historical figure or someone like that. I'm giving you a whole heap of choices to go with.

Since I know how many feel about spankings when it comes to children, I'll make this an adults-only thing. Look at it this way, if you see some kid acting up and is obviously in need of some discipline, do like I did the first time I used The Tanned Hide and hold the parent(s) to account.

I suspect with the mention of the words "spankings", "kinky" and now "adults-only" this post is going to get a lot of hits for all the wrong reasons...

Anyway, the second and last rule is easy enough. All you have to do is send me money pass this award along to up to three bloggers you may deem worthy. Note I said up to three bloggers. So one or two is fine. Just notify the new recipient and tell 'em Vinny sent you (so they'll know who to blame).

That's it! No hassle, no stress.

Now for the recipients. The following blogs are the first to receive the new and improved (not so much) Tanned Hide:

- My Half Assed Life

- My Own Private Idaho

Congratulations! Come get your prize!

I chose these three because, not only do I find them deserving, but because I'm interested to see who they'd want to slap some sense into if given the chance. Also, I chose them because, basically, I'm the boss around here and I can do what I want. Don't feel sad if I missed you this time. I'll share some more spankings in the near future.